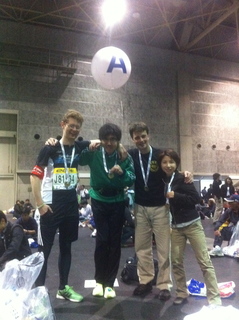 Ran the First Annual Osaka International Marathon with fellow runners Adrian, Chika and Laszio  in 4:42:47. Not bad for my first “Full” Marathon I guess! The conditions were rather good. Cloudy with sporadic light rain and an average temperature of about 20 degrees celsius. The course was pretty flat for the most part except at the beginning and at 39K where there was a big bridge. The event was extremely well organized and the crowd was the expected vivacious “Kansai” style crowd: loud, in-your-face but very kind and friendly, offering us umeboshi and other salty items along the way! I love Osaka and it’s people! 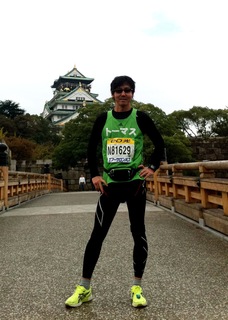 As it was my first marathon, I didn’t know exactly what to expect, but everything happened on cue as planned. I ran the first 30k pretty consistently at about 5:40-
5:50/km well on my way to a sub-4 hr marathon. I paced myself well using my new Nike GPS Sportwatch that I got online and is not available in Japan yet....and at around 32K...I hit the “wall”. The muscles starting getting tight and hints of cramps began to show. By then my pace had fallen to about 6:30/km and steadily heading to 7:00/km where it finally ended up at 7:45/km. Miraculously I didn’t get the calf/hamstring cramps that I usually get but instead excruciatingly sore thighs and knees!....As I ran the final 3k or so, half of the runners were walking and many on the side of the street stretching out their cramps or getting medical attention. I somehow ran out the final 2K! Then the finish line. I raised my arms up like I just won the Olympics!

All in all, I am happy to have finished and to have accomplished a long term goal. I started running in races just this year and didn’t expect to be able run sub-5hrs within the year.

After the race, Adrian, Lasi and I went for some Osaka-style “street” food and beer, then promptly crashed out at 8pm!

Great blue skies, and it looks warmer than Tokyo, I envy you!

I am in Kyushu Kagoshima and have been doing daily runs along Kagoshima Bay in fron of beautiful Sakurajma Volcano! Not too good for the lungs but awesome for motivation! 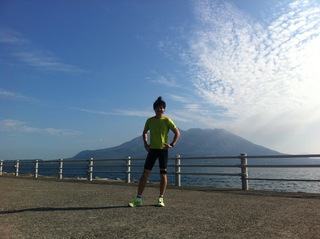 Well, get out there and practice!

Thanks Joseph and Juergen. I really don't want to make any predictions for Tokyo, but hopefully marginally better than my Osaka time of 4:42...

Will be supporting at Tokyo! Keep me posted about numbers and target times! Maybe, we can meet before!

Congrats on finishing your first marathon! I ran the Osaka marathon too, and finished at roughly the same time. I suppose we may have passed each other at some point. The sushi tables around the 36km were amazing! Next up, Tokyo in February!

Comment by Adrian Ringin on November 1, 2011 at 8:30am
Hey Thomas, this was a great result, congrats! Osaka definitely had a nice vibe. The crowds were really friendly and everything was well organized. They do need more toilets though! Juergen, it turned out I couldn't get the t-shirt made in time, so I just wore an armband instead.

Comment by Thomas Sawada on November 1, 2011 at 2:15am
Thanks Juergen....Your advice has really helped me a lot!  Next Full is Tokyo Marathon. Goal sub 4:30 (humble beginnings)