I stood at the start-line of my first race in Mexico! And I was facing the mountain ahead, just having gotten over two weeks of altitude sickness and cold. Mexco City is about 2100m high, the start of the in Tepotztlan a bit lower, the mountain ahead maybe 3000m (unconfirmed). Even more worries came when I looked at the runners around me, most were smaller than me (and I'm 157cm) – that is the built of the Tarahumara, I thought. Looking up to the mountain, and down at my Asics Sortie Magic (120g), I knew that this was gonna be hard.

They introduced the invitational runners, among them a medallist of some mountain running world championship, also smaller than me...

And off we went! First we ran along the main street, cobblestone, the Magic did ok. After a kilometer in about 4min, the hills started. And they were steep! The next two kilometers took 26 minutes. I have run mountain races, this was much steeper than even Oyama Tozan in Japan, but the distance was 16k! My body though, did surpisingly well, considering the altitude. I walked the steps, cruised on the flat passages, and thought of myself as a Samurai in Tarahumara country. After about an hour and 7k, we reached a peak and somebody told me I was in 48th position. I thought:“If it is downhill from now, this will be a good race. Forget it, we went down, a bit along a ridge, and up again to a second peak. 8K in about 1h15. Well, now the downhill should start... Yes, but it was steep, and stones hidden behind the leaves, had to grab trees with our hands in order not to fall.

At about 9k, another gruesome hill, and the first iron ladder!! After that, I realized that I started to feel dizzy, obviously, we were high up. On a relatively harmless passage, I fell and broke my Garmin's wristband! There was a little blood, too, but not too bad. We got to a water-stop, and they gave me another plastic-bag of water – you bite them open, great idea for this kind of race, I just wonder if they are bio-degradable. I cleaned my wound while running, the broken Garmin in one hand. Up we went again, and just at the beginning the downhill, I fainted. Suddenly, somebody grabbed me and carried me back up the hill to a shaddy spot. A course marshall had seen I was in trouble. He said something about „recuperar“, I know so much Spanish. Fortunately, I recovered quickly and started the descend, which turned out to be the final one, but to steep to run fast, partly had to climb down. But I knew the worst was over. Still, some guys in tougher shoes passed me, but I was hoping for revenge once we hit the car road. At about 13 or 14, my time had come. The Sortie worked their magic, the broken Garmin said 3:50 per k, and I was flying past some of the people who had just passed me. Altitude doesn't matter on downhills, the legs do the job!

At the finish, I enjoyed a massage and talked to the people in Spanish, my Spanish is compiled from sources of Latin, French and Italian, but it worked fine. Runners always understand each other. I also met Hillario, a new friend who I had met on the bus and who had helped me to get to the place. He was a bit faster, but he is younger, and, well, used to the altitude.

Ome-Takamizu two weeks from now will be a walk in the park! 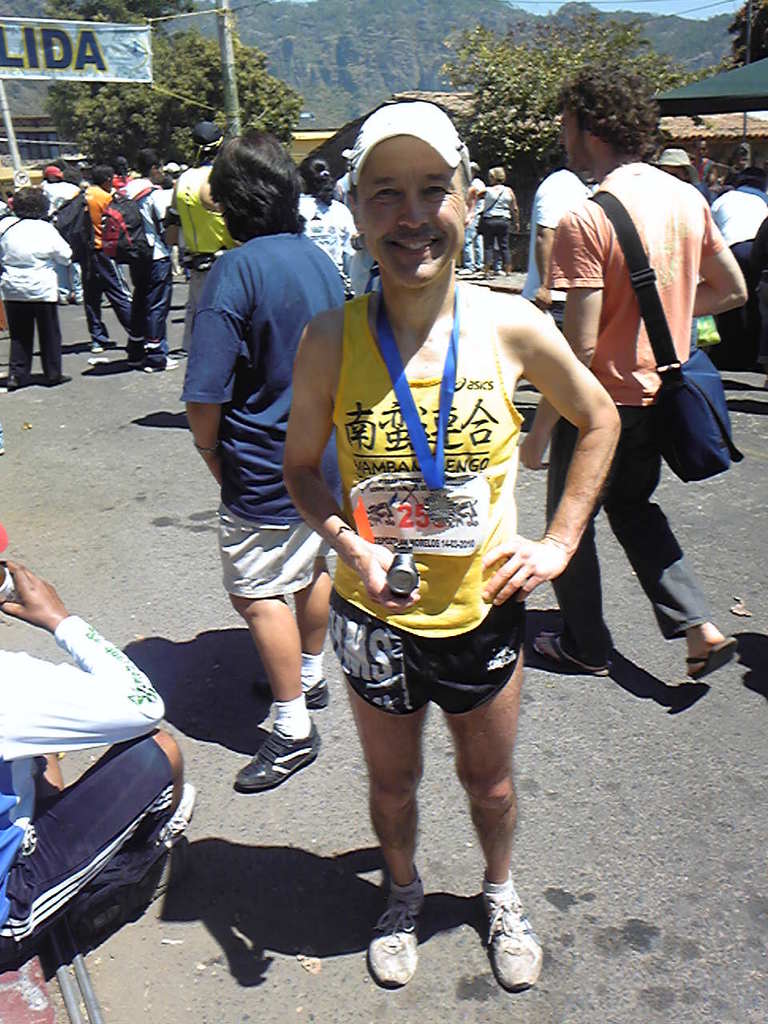