"Great is Victory, but the Friendship is all the greater!"

So, who is the guy on our default icon? 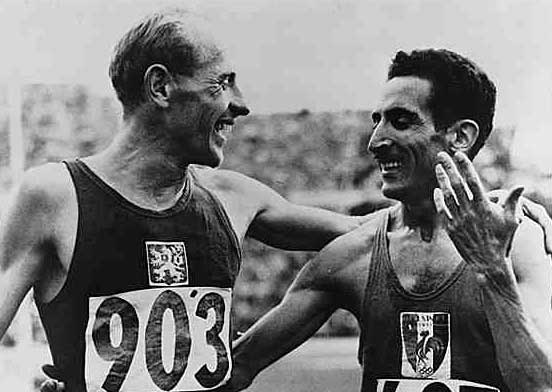 Emil Zátopek, the great distance runner known as the “Czech Locomotive, was born on September 19, 1922 in Kopřivnice, he died in Prague on November 22, 2000. The picture shows him with his friend and long-term rival Alain Mimoun. He achieved the feat of winning three gold medals in the 5k, 10k and the Marathon at the1952 Summer Olympics in Helsinki.

Zátopek was the first athlete to break the 29-minute barrier in the 10 km run (in 1954), and was known for tough and innovative training methods.

As a 16-year-old, Emil Zátopek worked at a shoe-factory, and one day, the factory sports coach ordered him to run a race. Initially believing he was too weak to be a runner, Zátopek finished second out of the field of
100. After that point, he began to take a serious interest in running.

The following year Zátopek broke the 10 km world record twice, and in 1952 broke the existing Olympic record in each of the three events he won. And, unbelievably, the marathon was his first one! His victory in the 5 km came after a ferocious last lap in 57.5 seconds, see the video at: http://www.runningintokyo.com/video/1117704:Video:162

In the 1956 Olympics an injured Zatopek finished sixth to his old rival and friend Alain Mimoun. He retired from competition in 1957.

Zátopek's running style was distinctive and very much at odds with what was considered to be an efficient style at the time. In addition he would train in any weather, including snow, and would often do so while wearing heavy work boots as opposed to special running shoes. He was always willing to give advice to other runners.

A hero in his native country, Zátopek was an influential figure in the Communist Party. However, he supported the party's democratic wing, and after the Prague Spring, was removed from all important positions and forced to work in a uranium mine as punishment, but was later rehabilitated.

His wife Dana Zátopková was an outstanding athlete in her own right and won the gold medal in the javelin in the 1952 Summer Olympics. (compiled from wikipaedia and internet sources)

Comment by juergen wittstock on May 31, 2010 at 9:25pm
Yes. We know how much Paula Radcliffe improved through proper analysis!
On the human side, I really wonder how much the time at the uranium mine led to his sickness and death... I couldn't find anything about that, but he is surely as great a personality as he is a runner.

Comment by Owain Vaughan Lewes on May 31, 2010 at 6:37pm
Great job Juergen! Fascinated to know what times he could have run if his style had been more biomechanically efficient.