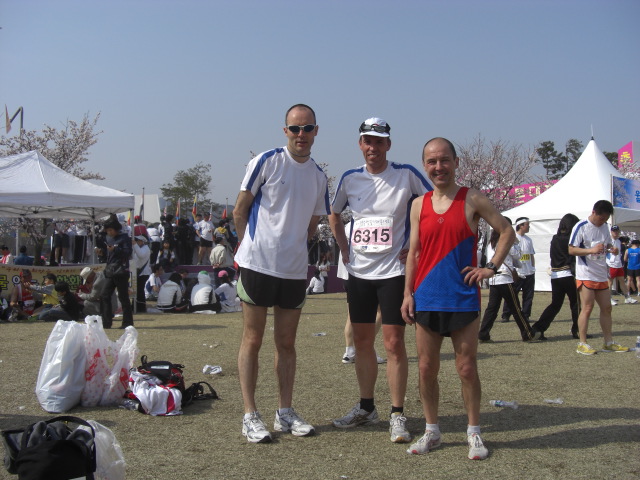 This was my last race in Korea, and it was the most
confusing one! I went to Gyeongju to day before, and,
thanks to Namban's Steve Lacey, managed to hook up with
Owain Lewees, a Brit who lives in the southern part of
Korea and had just managed a sub 2:40 at the Dong-A
Marathon in Seoul. We arranged to meet at the reception.
On race day (Sat. 5.4.), I went to the shuttle bus stop
early (6:30), sure to have enough time before the race. I
had run a bit before that near my guesthouse, so I figured
I would have plenty of time. The race was supposed to
start at 8am.
Well, the bus was late, got into a traffic-jam, and I got
there at 7:40! Couldn't find the trouble-desk to get my
number, so, even with Owain's better knowledge, I started
the 10k from the back of the field.
I passed hundreds, probably thousands of people, with the
other runners actually cheering for me! But still, the
7:47 for the first 2k was 27sec. behind schedule (for
36:40)!
At about 8k, I was running well, had caught up a bit, I
realised there was no goal nearby! I was running the HALF!
My friend BJ, who is an ultra runner, had done it again! I
had a half -marathon number! Well, I decided to go for the
10k and then think again. 37:11, another over 40pb, but
considering that I lost 27sec. at the start...
I decided I may as well run the half! 15k went by in
57:33, another recent best. In the end I slowed down a
bit, but managed a respectable 1:23:20!
At the finish I met Johannes, an Austrian who had just
finished in 1:32, and Owain, who had jogged the 10k with a
woman, was waiting for me. Shared food and coffee, and
lots of runner's stories, in hindsight, a fun day!