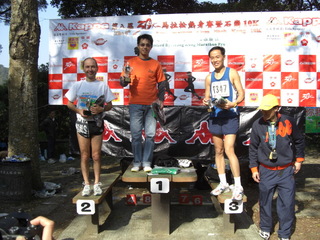 Yesterday I ran the 10k, the shorter one of the two 'undulating' courses near Shek Kong in Hong Kong, and I finished in 38:46, a very good result on a challenging course. Just my splits on the first 3k are proof for this: 3:43/3:30/4:22! I placed 2nd in age-group and 3rd over-all, got lots of stuff and a nice trophy!

Undulator 2 - Spiridon's Revenge
Like eight years ago, I'm passing in front of Kadoorie Farm, steep hills, great view, beautiful blossoms, blue skies, that's X-mas time in Hong Kong.
The bus turns into Route Twisk. Yes, spell-checker, shut up! Twisk, not twist. The driver shifts to second gear. Engine still turns lower and lower. But comes to an involuntary stop. Back to first gear. Up the hill at walking-pace.
We arrive, I jog to the registration, it's cool, almost chilly. I find Gary Eng, he arrived even earlier. And I meet Mark Reeves who beat me by 3 seconds at the Boxing Day Run. I always seem to have a rival in those races, eight years ago, it was John Myatt (see below).
From the start, I find myself close to the leaders, but after the very fast second kilometer, I settle into a comfortable 4th, letting Mark go with two fast Chinese.
I definitely want to avoid un-duell-lating myself (un-duell-lateness: undue lateness due to a duell).
Later in the race, my strategy pays off! I catch Mark at the 4k mark, but loose the leader, temporarily running in 2nd. Unfortunately, another Chinese guy, who actually was in my age-group, passes me. He had run even more defensively, good job. On an uphill at about 6.5, another Chinese catches up, but I manage to open up 3 seconds on the following downhill, which I desperately defend to the finish, running the last kilometer in 3:40.
I finished within sight of the winner, so, even though I was happy with my result, I wonder if I could have done better. All my friends and my stomach know that 9:30am is too early a starting time for me. Ran straight to the - already flooded - loo after finish (will not further elaborate).
And, believe it or not, tomorrow, I'm registered for another hilly 10k on Cheung Chau Island!

Comment by Blurmax on January 3, 2008 at 12:01pm
Curro,
U really ran fast - congratulations.
I completed the same race in 51 mins+.
See U later than (Mizuno Half Marathon?)

Comment by Mike Cartwright on January 2, 2008 at 9:48pm
Glad you enjoyed the runs . I did the 30k that day . Its a good course and challenging as ever . I will be in Xiamen this saturday for the half marathon .