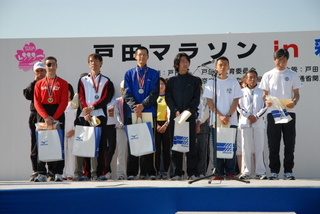 Sports & food stalls, free products as giveaway and a perfect organization that went from Half Marathon, 10K, 5K to the 2K for parent and kid and kids only for a total of 6306 entrants. Toda Saiko Marathon, definetely an event to recommend to join.
Just before starting my warm up I realized I did not bring my running watch and I decided to take the race as it would have come and to run by feeling instead of by time.
The 10K course was one big loop with two hills and mostly flat, with each KM marked and three water stations.
I went out at what I felt a good pace trying to avoid starting fast. I adjusted at a comfortable speed and kept going. 5K mark came quite quick and just before the mid-race mark an 180 degree gave me vision where I was in the race: about 15 people ahead of me. I remembered that from the brochure this seemed to be quite a competitive race so I imagined that the leading group were fast guys running at 32/33mins final time and being not so far from them I deducted that I was running at a good pace.
At 7K my right side started to bother me as it usually does just before stitches blast out so I reduced a bit the pace and after a while a guy passed me. He definetely looked over 40 so I decided not to let him go too far.
Around 9K another over 40 runner approached me and passed me.....with about 800m left to the finish line I decided that stitches or not I would have give everything I had into a final kick.
I passed a first runner, a second runner and with 300m to the finish line even a third one. I closed keep kicking as much as I could!
The finish was a bit of drama for me because I had no watch and I clearly saw 16:20 on the clock but with a big sign saying 5K and I thought I also saw another clock saying 36:16 for the 10K. Two clocks on two different sides and for a one eye guy like me this can be a challenge, especially when you are passing the finish line sprinting!
I kept wandering in the sport and food stalls untill they called the names and mine was the 6th. I moved to the result board just to feel sad when I did not see my name in the sixt position and instinctively I started to look downward...7th...8th...9th...my name was not there!
"Let's have a look upward" I said to myself and with great surprise I found my name in the first position of the over 40 category with a time of 36:17 on 501 finishers! This is a 1m30s improvement from my previous 10K PB in TYO Marathon.
Overall I finished 13th on 1294 men and 438 women. A nice Mizuno orange bag, a diploma and a thick, heavy gold medal was presented to me by Yuri Ichihashi.
A day to remember!