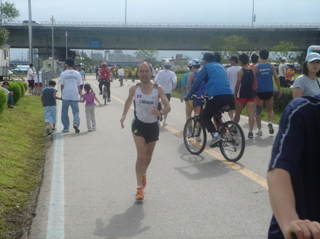 Yesterday I ran my first race in Seoul this fall, the annual Terry Fox Run for Cancer Charity, held at Han River in the center of the city.
There was a considerable number of participants, but the race was even less competitive than the one in Tokyo, the runners were kept waiting for the speeches to be finished, then we finally started, much later than the announced 9:30. Never mind, it is a charity event.
Nevertheless, when we got going, there were a few guys heading into the wind along the river at a good pace, so I settled into third, after initially leading for a few hundert meters.
Before the turning point the guy ahead of me slowed down, so I decided to make my move, eventhough we were still running against the wind.
I realized the first guy was just too fast and finished a comfortable second in 39:38 - course length probably as accurate as the starting time. Running felt great, but I could have done with something better than Kentucky Fried Chicken for lunch - well, we can't decide who sponsors a race...
Thanks a lot to injured David Deubelbeiss for coming along and letting me run in that cool Canada singlet! And congrats to Chrystal Johnson for a gutsy performance of a 10k race included in a long run!
Juergen