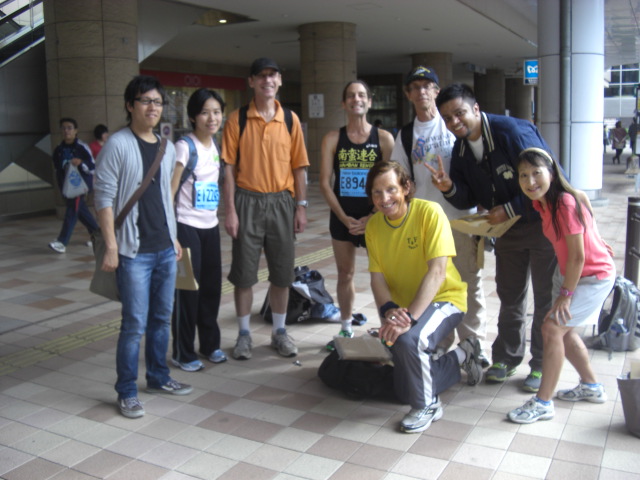 As some of us went there by themselves, I could not get everybody's results, so forgive me if I start  with my own race, the 10k. My target was a 4min/k pace, so Takashi Nobukiyo, our Hakone-hardened ex-pro, flew by me a short time after we head out into the blazing sun - it was unusually hot for October. I settled in with a group, running my splits according to my Garmin, leaving the fastest woman behind - not used to that anymore. At about 3.5k, an odd thing happened. At a water station, there were so many people that I could hardly pass and had to slow down to a jog. I realized we had run into the slowest of the half-marathon runners. To make things worse, my Garmin's screen went blank - no batteries! Well, I did my best, and got into a nice stride on the last 3k, when we were free to run fast again, passing even a few people. At the finish, the clock said 41:38, initially, I felt upset. But then I realized that Takashi had beaten me by just about 90 seconds (40:04), and I had come in top 40 - of 4000 (?). Well I am not so unhappy anymore!

In the half, veteran Bernd Plagge did great in 1:33(!!!), beating Robert Hirst (about 1:38?), Padraig MacColgan, Anthony Kraft, Paul Mundt and Tony Boyle - all a bit over 1:40. Then there were Jon Holmes and Christophe Dewulfe, coaching his wife in under 2h, and Annizam Morthar in 2:15.

We still had to wait for another hour for our only Hongkong member, Lynne Yu, who had fainted, like many others, and finished, after a break at the 20k mark, in 3:15! Congratulations to Lynne and all to a gutsy performance an a dangerously hot day - jogging along the course I saw about five people who were being assisted by staff after falling or passing out due to the heat!

In the 5k, "Flying Frank", Frank-Arnoud Mehl finished 3rd in 18:50, great place, slow time, so you know how the conditions were. Picture below show him on his way to the goal. 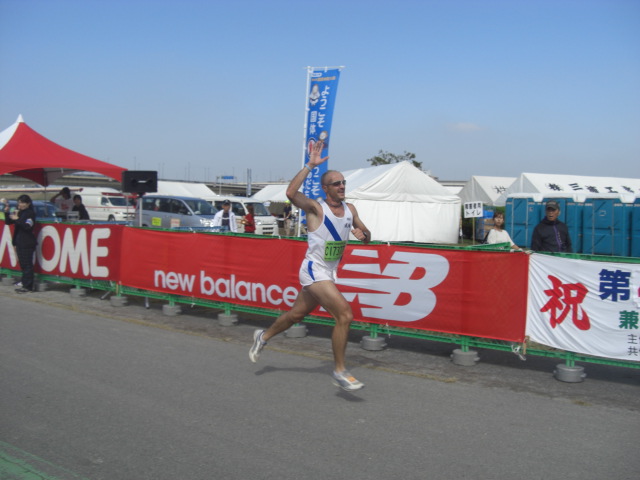 Comment by juergen wittstock on October 17, 2011 at 12:26pm
Robert Hirst just told me that it took him more than 10 min. to cross the starting line - see video section, he was in the back of the pack, so, considering the fact that he had all the slow runners ahead of himself, he was probably at a mid-1:20's level, or even faster...