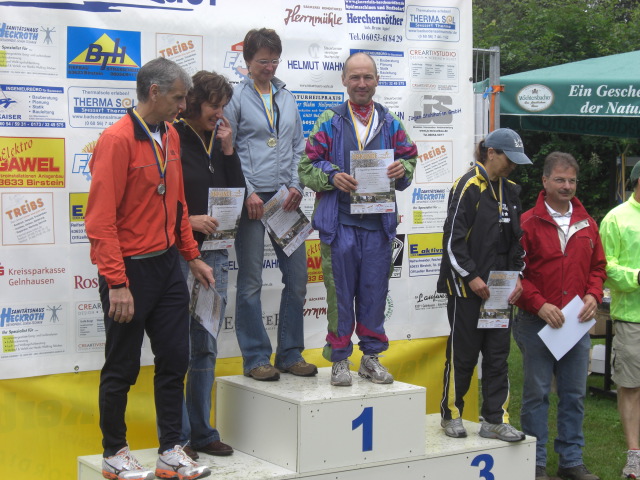 Today I ran this hilly, but very pleasant 10k in the rural hinterland of Frankfurt. It was a rainy day, and I was lucky not to get too wet on my motorbike on the way to the race. Start was about 40h after my plane touched down at Frankfurt airport, considered a reasonable amount of time for recovery from jet-lag among heavily-travelled Nambaners. Brought my (Asics) Sortie Magic - they looked so cool compared to what the competitors were wearing - and new yellow Namban Singlet. So I tried to run like I had no excuses, and succeeded! Stuck with the leaders on the first kilometer, ran it in 4min - slightly uphill - then eased off a bit, but kept the over-all leader in sight for most of the distance. K-markers were probably accurate, but as the highest point was in the middle, I ran a 39:25 on a 20:38 5k split. Last k in 3:30, I was flying, beat the second guy in my age-group by more than two minutes! Finished sixth over-all out of 129. Kept up my-unbeaten streak on the distance (10k) in Germany, but have to admit that there is one guy who is faster than me in my hometown-area, but he prefers the longer distances.

Comment by Stefan Hüsler on July 25, 2009 at 12:35am
Congratulation! That's a very good time for such a course :)
Let me know if u have any plans to visit Zurich! Liebe Grüsse, Stefan