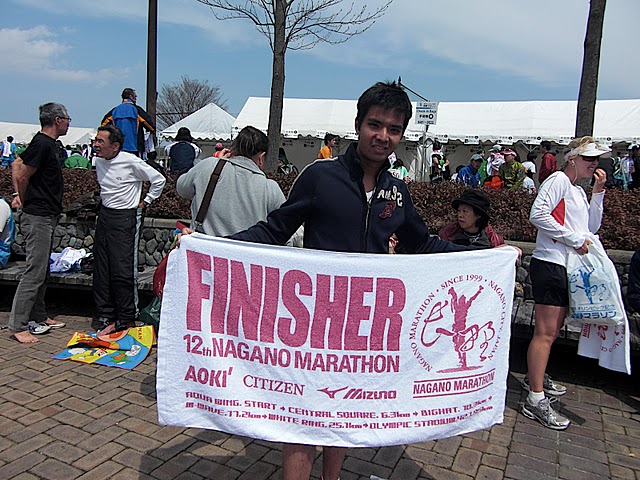 4 Nambanners did the Nagano Marathon on 18 April 2010.Here are the reports from Harrisson, Leng & Arnaud.
HARRISSON:3:06:21 (PB)
Though it's a PB I'm kinda disappointed as I was targeting 2:59 =P. However, after halfway point I realized that it was a bit ambitious, especially with such a relatively "low" peak mileage at 80k/week
The disappointment is more for the fact that I could have something like 3:02 if I avoided some stupid things:
1- To have a sleepless night the night before the race
2- To do a 2* 50m sprint workout the wednesday night before the race (Bob, your workout was really tempting, but I had sore quads until the race-day)
3- to do a 2-weeks taper only
4- to follow a 3-hour pacemaker that tried to catch up the minute we lost over the first 2km by running a sub 4min/km pace for the next 3k!
I did the first half in 1:29:20 and I was on pace until the 30km mark, then I faded litlle by little until the 36km mark where I was totally miserable and where my pace was down to 4:35min/4:40min pace.
The course was overall flat but it had couples of short but super steep hills from the 32km mark which were very annoying, we also had a head wind from the 29k to the 35k, even more annoying.
Though I finished in a very miserable shape, the course was nice and the crowd cheering nice as well, so I can say I had a good time there!
LENG LENGGross : 3:19:21 (pending official time)
*truncated report*The weather was really cold for me. I ran like a mad woman. Did a recent half-marathon PB (1:35), stupid mistake.At 25k, we started to face headwind. From 33 - 37km, it was unbearably cold and the headwind was getting stronger as we ran along the river. I had to take walking breaks, but still tried to maintain average pace between 5 - 5:30km/hour. The only motivation that kept me going was the thought of defrosting my frozen fingers and toes at the finish line.The last 2km was..... (Singaporean) kena sai (like s**t). Gross time: 3:19:21. Nett time : 3:18++I wanted to start the race with an aim of qualifying for London (3:30) and adjusted my expectations after the weather prediction of snow a day before the marathon. Fortunately I met my target. Regretfully I could not beat last year's time, but I am still happy that I completed the race under the circumstances (could have taken a taxi..). Inspite of the weather, the race was still fun. The support along the way was awesome. Most Nambanners would have presented great results, if only they were at the starting line!Harrisson did a PB! Impressive result for a 3rd (or 2nd?) marathon.Annette bravely completed her first marathon after 8years with abt 4hr. She overcame personal difficulties (her boyfriend had mishap on sat and needed 4 surgeries..), travelled for more than 5hrs to get to from Yokosuka(?) to Nagano.Arnaud completed the race with a 25km+taxi. He ran with a pink number tag - Ladies' category (not my fault).ARNAUD
I came, I ran 25k, and took a taxi back to the finish line. He said he quit in protest of the pink number tag (Ladies' category). Not leng's fault. It's the organiser's. Leng wrote an email to complain. .