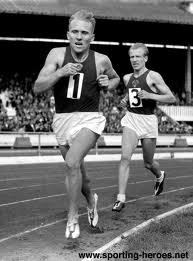 1950-1954 was without doubt Emil Zatopek's era. He was the male star of the 1952 Olympics, winning 3 gold medals. However by the middle of that decade he was no longer the dominant force and was unable to repeat his astounding feats at the 1956 Melbourne Olympics. His best result of those games was a sixth place finish in the marathon; which was won by his old friend Alain Mimoun of France.

His heir as the the distance king of the 1956 games was a Soviet army officer called Vladimir Kuts, and it is to him that we turn to in the latest installment of the greatest distance runners in history.

Vladimir Petrovich Kuts was born in Aleksino, Ukraine on February 7 1927. His earliest sporting activities were boxing and weightlifting. Nevertheless when he took up distance running, he embraced its spartan demands like a duck to water.

Due to lack of training partners and opportunities to race outside the Soviet Union, his training was largely conditioned by hard running; with the clock as his main rival. And this would pay off with gold in the 1954 European 5000 metres-beating the likes of Zatopek and Chattaway, 8 world records, and ultimately 2 Olympic gold medals at 5000 and 10,000 metres; where he crushed his rivals including Gordon Pirie in both events through a devastating display of front running.

In 1957 he set a 5000 metre world record of 13:35, which was broken by Ron Clarke in 1965. Unfortunately loss of form and injuries forced him to retire in 1959. Whereupon he took up the role of Soviet National Coach and played a prominent role in the communist party.