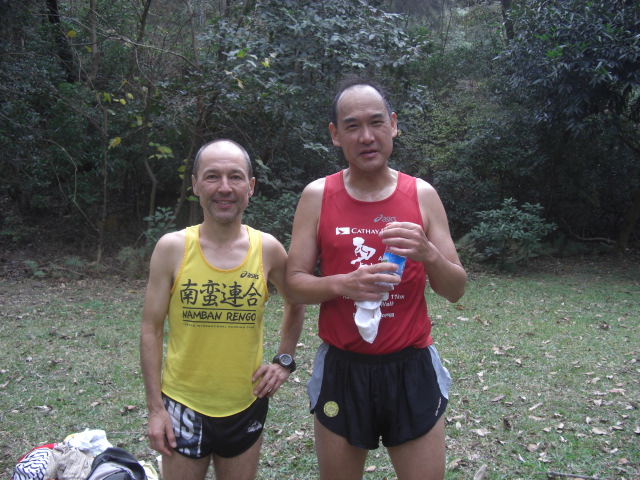 Yesterday, Gary Eng and myself ran a 10k on Lantau Island, and for me it turned out to be the first race I really appreciated the 'help' of my Garmin. I had run a decent 8k in Melbourne (31:35) at the absolutely accurate course around the Tan (Botanical Gardens), but I felt I could still go faster if the race was later in the day. The race yesterday started at 11am and there is a 3h time-difference between Melbourne and Hongkong, so that meant that, according to my inner clock, the starting time was 2pm. BUT - what would the course be like? It turned out to be an out and back, with a steep uphill first k, then continuing slightly uphill, partly undulating.
Well, we got there, and they told us applications were closed! Shock! However, after some negotiations, they agreed to let us run without number (but still provide water...), we didn't have to pay, but would not receive prices. Too bad in my case, but, never mind.
I started with the first race of two, falling back at the steep uphill (Garmin-pace around 4:07). Caught up with the leaders at about 2k, ran with the leading group until the turnaround (4850m, a bit under 19min), there, three guys blasted off, I settled in fourth running around 3:40 pace now. Two more guys passed me soon, but I could keep up, with the decline getting steeper, pace fell below 3:40. I passed one guy back at 8k, next one at 8.5k. but this one hung in with me. We reached the steep decline, Garmin at 2:59/k pace(!!!), and the guy still left me in his wake. I finished the race in 36:33, but continued to run until my Garmin said 10k, the result was 37:41, a Garmin-aided age-graded PB!
Gary did it as a training run, finishing in about 50min.

Comment by juergen wittstock on January 9, 2010 at 9:06pm
A bit uphill in the beginning, but it's good to know that it ends on a steep downhill, mentally easy!