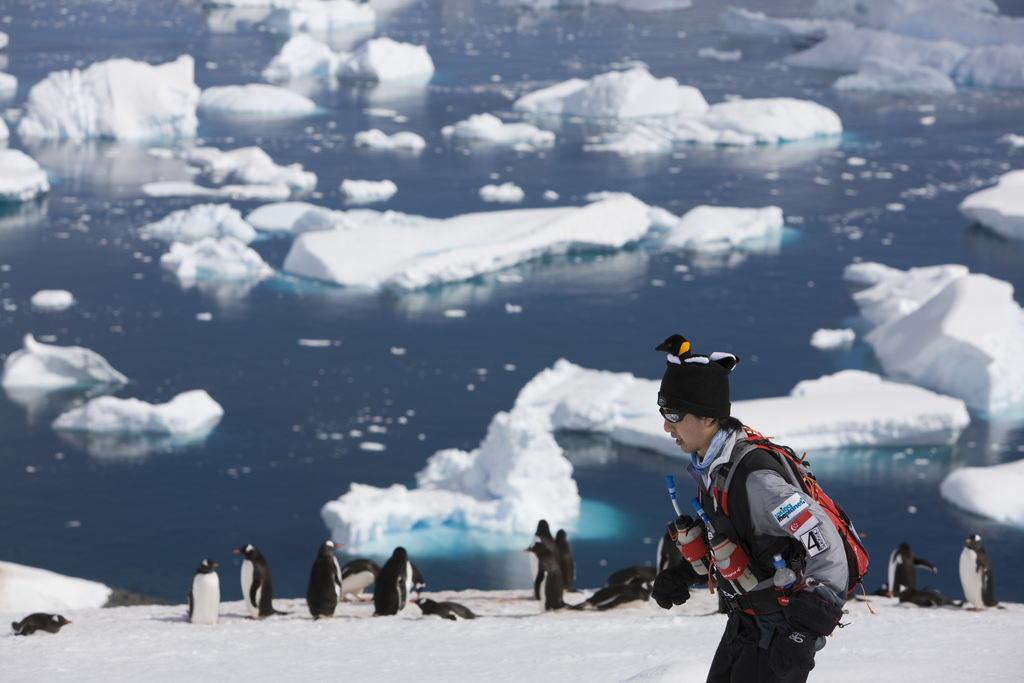 It is the fifth edition of The Last Desert, the most eagerly awaited race in the 4 Deserts series because of the rare chance it offers individuals to race in Antarctica, one of the most pristine natural settings on Earth.  It promises to be an historic edition with several individuals aiming to break records.  Vicente Juan Garcia Beneito, a 36-year-old firefighter from the Alicante region of Spain, sets out to become the first person in history to win all of the 4 Deserts events in one calendar year—a huge achievement. In the women’s division, Germany’s Anne-Marie Flammersfeld takes on the same challenge having won women’s gold throughout 2012.

“The Last Desert is always an anticipated event that, for many, is the pinnacle of the 4 Deserts journey.  The year 2012 is especially exciting with so many records: the men’s and women’s winners both set to make history by winning all 4 Deserts in one year; four of the youngest people ever to compete; and the largest number of Grand Slammers in history,” says Vice President of Events, Samantha Fanshawe.

A large proportion of competitors are arriving to the end of an incredible year; 18 are attempting to complete the 4 Deserts Grand Slam in 2012, having successfully completed the Atacama Crossing (Chile), the Gobi March (China) and the Sahara Race (Egypt).  Leonard Stanmore of Canada is attempting a record of his own: to be the first person to complete both the Seven Summits and the 4 Deserts series.  The 60-year-old races to raise money for the charity Trekking for Kids.

An extraordinary sense of diversity is evident in this year’s field. Amid the 55 competitors taking part, a total of 27 countries are represented, including 11 Australians in the field.  Ages range from 22 years to 63 years—the oldest competitor is Kumi Murakami, a swimming coach from Japan.

The journey begins on Thursday, 22 November, when competitors board the Dutch expedition ship in Argentina and set out on a two-day route through the Drake Passage. The race kicks off on Sunday, 25 November, where competitors set out on a course that traverses a rich assortment of landscapes, from deep snow and high points, to a black sandy beach that is so warm from geothermal activity that it continually steams.

Surrounding the activity will be extraordinary wildlife of The White Continent, from penguin colonies to whales, seals and a rich variety of birds.  The course is set according to weather conditions and may move over a host of settings including Paradise Bay, Cuverville, Neko Harbour and Wienke Island, on which Dorian Bay, Damoy Point and Port Lockroy are located.  A night spent camping on the Antarctic Peninsular is also planned.

Unlike other 4 Deserts events, competitors will be sleeping aboard the expedition vessel between the planned six stages, yet they still must carry their own supplies - and take on the immense challenge of racing through the snow, ice and freezing conditions of the world’s largest cold desert.

The Last Desert (Antarctica) is held every two years and forms the final race of the iconic 4 Deserts series.  Competitors must complete a minimum of two of the other 4 Deserts events to be invited to participate in the race.

The self-supported footrace is up to 250 kilometers with competitors having to carry a mandatory list of equipment, nutrition and water on each stage. The race uses a polar expedition ship as its base, traveling to the different course locations on the Antarctic Peninsula and offshore islands based on the prevailing sea and weather conditions, with competitors transferred from ship to shore by special zodiacs.

The unique challenges of The Last Desert (Antarctica) include having to cope with the severity of the weather conditions that can include gale-force blizzards and temperatures down to -20 degrees C (4 degrees F). Competitors also have to deal with the unpredictability of daily stage lengths and start-times, as the prevailing environmental conditions dictate where and when stages might begin.

For media and press enquiries including access to photos please email info@racingtheplanet.com.